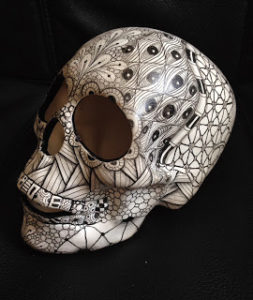 I went to Mexico City recently to be at our  booth at the Christmas Crafts Annual Show.
Between ZIA classes I  was doing demos with the different tangles and doodles using this ceramic skull I had just bought for that purpose.  It was a big success, specially because we were approaching November 2nd, which represents one of the most colorful and ancient Mexican traditions:  Dia de los Muertos (Day of the Dead).
Dia de Muertos is a very peculiar tradition that has its roots both in the ancient Aztec beliefs  and those brought to Mexico by the Catholic Spanish priests during the colony years ( 1510-1810).
Aztecs used to honor their  God of Death  with diverse celebrations in October and November. November 2nd is the Day of the Saints festivity for Catholics. Mexico’s Dia de los Muertos took a bit of both worlds and created a new very particular tradition in which we honor, remember and celebrate our loved ones that have passed away.

Altar de Muerto
The Day of the Dead Altars are the main part of this celebration. All of them are colorful, joyful and include:
sugar skulls, pictures of our loved ones, candles,  Cempazuchitl (marigold) flowers, papel picado, the favorite  food and drinks of our “muertitos” and certainly the “Catrinas” (elegant skeletons wearing hats, flowers and long dresses). 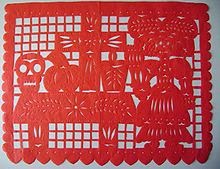